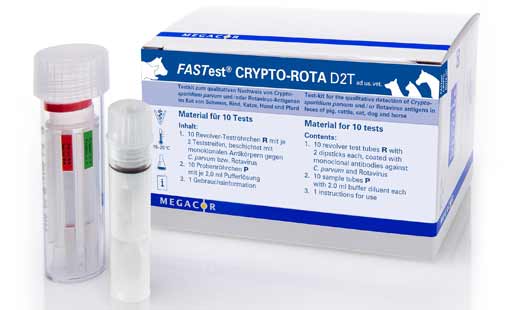 FASTest® CRYPTO-ROTA D2T is a rapid immunochromatographic test for the qualitative detection of Cryptosporidium parvum and Rotavirus antigens in feces of pocket pets, pets and farm animals.

Diarrhoea can lead to severe courses of disease up to death for all species. Among the diverse diarrhoea pathogens in pocket pets, pets and farm animals, especially Cryptosporidium parvum (C. parvum) and Rotavirus (RV) are a great challenge for the veterinarian due to their common appearance and their zoonotic potential.

Especially in cattle population, Rotavirus is widely spread (seroprevalence up to 100%). Recent studies in Germany with small animals have shown prevalences in dogs and cats of 7% and 8%, respectively.

Cryptosporidia form two types of infectious oocysts: 20% are thin-walled and stay in the host, where they cause reinfection through autoinfection. The remaining 80% are thick-walled and are excreted intermittently, i.e. not with every defecation, as dormancy stages. These are very resistant and can remain infectious for months. They can infect other animals as well as humans via drinking water. Clinical symptoms can vary depending on age and immune status of the animal. Neonates and young animals are predominantly affected.

Caused by the high infectiveness, often a population problem arises. Double infections are not uncommon. Special attention should be paid in the fact that Cryptosporidia as well as Rotavirus play important roles independent of the diarrhoea problem (asymptomatic shedders).

We use cookies to ensure that we give you the best experience on our website. If you continue to use this site we will assume that you are happy with it.
By clicking “Accept”, you consent to the use of ALL the cookies.

But opting out of some of these cookies may have an effect on your browsing experience.
Necessary Always Enabled

Advertisement cookies are used to provide visitors with relevant ads and marketing campaigns. These cookies track visitors across websites and collect information to provide customized ads.

Performance cookies are used to understand and analyze the key performance indexes of the website which helps in delivering a better user experience for the visitors.

Any cookies that may not be particularly necessary for the website to function and is used specifically to collect user personal data via analytics, ads, other embedded contents are termed as non-necessary cookies. It is mandatory to procure user consent prior to running these cookies on your website.

Analytical cookies are used to understand how visitors interact with the website. These cookies help provide information on metrics the number of visitors, bounce rate, traffic source, etc.